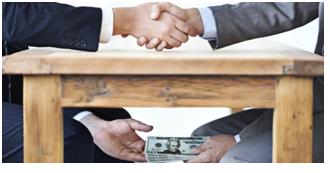 In its simplest sense, corruption may be defined as an act of bribery or misuse of public position or power for the fulfillment of selfish motives or to gain personal gratifications. It has also been defined as “Misuse of authority as a result of consideration of personal gain which need not be monetary”. Legally corruption is defined as “use of public power for private advantage in ways which transgresses some formal rule or law”.
Corruption is not a malady of modern age. History is replete with instances where Judas have received bribes in the ancient civilizations of Egypt, Babylon and Jewish society. Bribery was very common in Roman Empire as well as in France during the fifteenth century. England was described as a ‘sink-hole’ of corruption in the seventeenth century and Gibbon described it as the most infallible symptom of constitutional liberty in the nineteenth century. Even Chanakaya has mentioned cases of embezzlement by government officials. During the British Rule, bribes were accepted not only by the Indian officials but even by the highly placed British officials. Lord Clive and Warren Hastings were tried by a parliamentary committee after their return to England. Thus, corruption is not only an age-old malady but a global problem too.
Various laws have been framed from time to time to prevent or at least reduce corruption. The Prevention of Corruption Act came into force in September 1988. It was an improvisation of the Act of 1947. The scope of the 1988 Act was enlarged and widened to include the term ‘public servants’. Thus if an offence against a public servant is proved in the court there will be imprisonment of not less than 6 months upto 5 years and also the person may be fined.
Corruption is not a uniquely Indian phenomenon. It is witnessed all over the world in developing as well as developed countries. It has spread its tentacles in every sphere of life, namely business administration, politics, officialdom, and services. In fact, there is hardly any sector which can be characterised for not being infected with the vices of corruption. Corruption is rampant in every segment and every section of society, barring the social status attached to it. Nobody can be considered free from corruption from a high ranking officer.

he steps should be taken to correct the situation overall. Declarations of property and assets of the government employees are made compulsory and routine and surprise inspections and raids be conducted at certain intervals.
Though it seerris very difficult to control corruption but it is not impossible. It is not only the responsibility of the government but ours too. We can eliminate corruption if there will be joint effort. We must have some high principles to follow so that we may be models for the coming generation. Let us take a view to create an atmosphere free from corruption. That will be our highest achievement as human beings.

Author: Akanksha Shukla
0 people like this
Blog, OTHERS BLOG