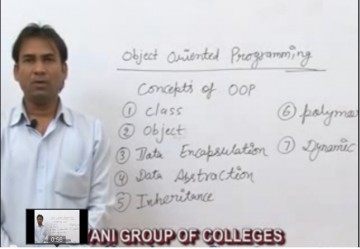 In Object Oriented programming the emphasis is on data rather than on procedure. Programs are divided into objects , Data is hidden and can’t be accessed by external design. The main concept are .
• Object:- Objects are identified by its unique name. An object represents a particular instance of a class. There can be more than one instance of a class.
• Class:- Class a blueprint for an object. This doesn’t actually define any data, but it does define what the class name means, that is, what an object of the class will consist of and what operations can be performed on such an object. No memory is allocated when a class is created.
• Data Encapsulation:- Data Encapsulation combines data and functions into a single unit called Class. Data Encapsulation enables the important concept of data hiding possible.
• Data Abstraction:- Data abstraction refers to, providing only essential information and hiding their background details .
• Inheritance:- Inheritance is the process of forming a new class from an existing class that is from the existing class called as base class, new class is formed called as derived class.
• Polymorphism:- The ability to use an operator or function in different ways in other words giving different meaning or functions to the operators or functions is called polymorphism.